trash can is stalking you: using wifi to track people in the real world 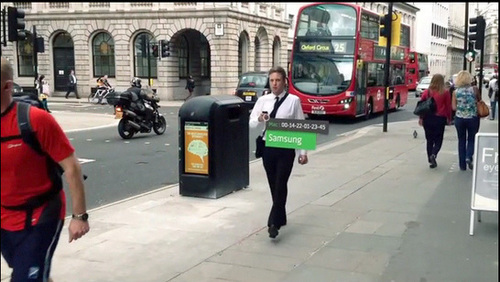 Smartphone-monitoring bins in London track places of work, past behavior, and more.

This is an important read. The MAC address can ultimately be used to identify any one if there are sufficient ‘trash cans‘ located in areas where you live. If you consider the number of CCTV cameras located around London for example. One of these devices attached to each of those would be enough to start identify persons of interest.

As the story explains, if these devices are placed in malls or next to public toilets, you can identify the gender of the user. If these devices are used at shopping malls, cinemas, bus stops, you can find out roughly where people work, go to school, what sporting matches or night clubs they go to, you can build up a profile.

This can be used for good or evil and the point is that it can be done without the users’ permission and without them downloading or installing any mobile application.

Given the law changes and debates around the world, ostensibly for the purpose of catching terrorists, this effectively allows people to be traced, but also the people they associate with, for example if my MAC address is frequently seen in the same places as other people, we have some form of association. Something in common. Big Data tools make finding these relationships very easy, its simple math that can be done on an Excel spreadsheet or any database application, combined with a GIS application as used by most corporates and Government Departments and now with low cost browser based SaaS applications you and I can do it for relatively little cost and without having GIS skills.

This technology (‘permission based’) is already being used in several industry segments including personal finance, games, loyalty programs and mobile apps. The situation with those are that people have some awareness and by tapping a button, or signing a contract have approved sharing their locations. The important thing here is informed consent.

I go a step further and suggest that people should always have the right to know what information is held about them and the ability to challenge or revoke access to it, depending on whether there is a legal requirement for that information to be provided.

Companies who use this technology will collect a goldmine of big data to sell. Where it is anonymous, that’s fantastic, it can be helpful to everyone. In the wrong hands it can facilitate crime and provide Governments or despots with valuable information.

Just like credit card hackers put card readers into ATM machines, anyone from a dangerous criminal to a security company or Government department could place this technology, or simply require access to the big data already collected to use for whatever purposes they desire.

It is probably already happening and like the Philip K Dick (one of my favorite authors) stories, it may already be way too late to do anything about it. The law changes being passed in many countries around the world appear to be facilitating it. You can’t escape the grid anymore.

It can off course be used also very much for the public good and I am an idealist and hope that it will. I’m happy to be marketed to where my profile is accessed and to be informed only about goods or services I am interested in, at the time I want to know about them, but I also would like a modicum of privacy and to be able to control when that occurs.

Ultimately citizens should have the right to know what information is being tracked about them and by whom, at least where it is used commercially or by law enforcement agencies under whatever guise.

7 Responses to trash can is stalking you: using wifi to track people in the real world