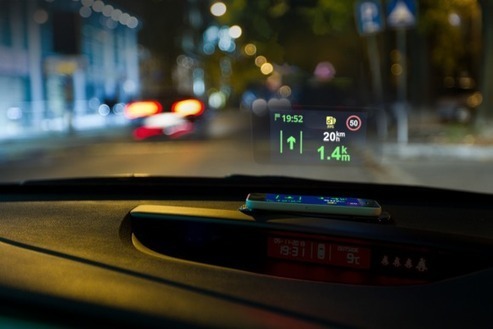 Stop looking at your phone, start using this head-up display with Sygic GPS app TechHive Even if you have a car mount to keep your phone in your field of vision, using it for navigation can still result in diverting your attention from the road,…

This is the future of all successful car nav devices imho. As displays get bigger, they obscure more of your windscreen. IMHO dedicated car nav is still the best tool for driving directions. Portable and integrated car nav devices are competing with mobiles and I have several blogs explaining why I believe a dedicated device is still better than an app. http://luigicappel.wordpress.com/2013/09/24/what-is-the-best-gps-to-buy-for-new-zealand-in-2013/

I have always wanted a car with a HUD. Leading car nav brands are starting to offer this feature ass an accessory which will answer the critics who are trying to reduce the number of distracting devices demanding the drivers attention. I believe driving with nav is safer than driving without it, but motoring legislators are exploring driver distraction, mostly because of mobile use and there is a risk other devices like car nav could become illegal in the mix. Adding a HUD could be a great way to preempt those decisions.

For those people who will not own a car with a HUD which will probably be standard on most new cars within 10 years, this is a great option. I’m hoping my favorite brand TomTom has one of these in the works.

I read a stat the other day and I must find it to include in my blog. It effectively talked about people who look down from the windscreen to do something like change the channel on the stereo, or read a txt message while driving at 100km per hour. It went something along the lines of you would be driving blind for somewhere between 50 and a hundred meters. That’s a football field. Now imagine a little child walks out from behind a car, just while you got fed up with the song you were playing. That song is likely to be etched into your mind and I’m sure that you will regret that momentary lapse in judgement forever, hence the need for some legislation regarding in car distraction.

Sometimes these laws don’t discriminate between the good things and the bad and throw them all out. Again, TomTom have many studies showing that people using quality car nav devices have less accidents than those who don’t and the damage from those accidents is also less.

Legislation often comes after a serious incident like the death of a VIP, or a series of trending incidents and accidents. Being proactive by coming up with devices like this one is a great way of providing a better service and giving us the information we need without having to take our eyes off the road.

Do I hear you saying Google Glasses? If you had apps that limited their use while driving to navigation and relevant information, great. Google is more likely to want to share your experience with audio books, news, social media and other mental and visual distractions. My advice to them would be to provide a ‘driver mode’ a bit like ‘flight mode’ that limits the apps you can use. If they are proactive and get in first, they will be able to continue to innovate, without costing lives. This would be a great corporate citizen thing to do.

Back around the turn of the 20th century there was a car accident in London. The car was doing about 9MPH and killed a pedestrian. The British Government said, “this must never happen again, no person should ever be killed by a motorized vehicle.” They legislated that any motor car driving in London had to be preceded by a pedestrian carrying a warning flag, walking in front of the car to make sure people got out of the way.

Seems stupid doesn’t it. Now we lose thousands of people every day. I’ll be surprised if there is a single person reading this blog who hasn’t lost someone they knew and  cared about in a motor vehicle accident. Anti distraction laws are being expanded on and I would hate to see a blanket ban on devices. So if you are reading this and you are a nav manufacturer, get cracking and build a car nav unit with a heads up display today. It will not only save , it will help PND’s stay relevant a lot longer as so many people are now saying, I don’t need nav, I have a smartphone.