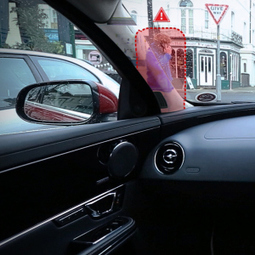 Imagine viewing 360° around your vehicle without having that view impeded by pillars, doors, and the roof. That’s what Jaguar Land Rover is working on. In order to make this view possible, Jaguar L…

These are very cool features. My car is high at the back and has blind spots meaning that if I change lanes I have to stretch my neck and can’t rely on my mirrors to know that it is a safe manoevre.

The Ghost Car Navigation is an innovation that would win them a lot of fans, as long as there is a way to track any car and it has to be beyond Bluetooth range. I’m not interested in the early Volvo type scenario where you can communicate with any car, so long as it is a late model high end Volvo. There are lots of ways this can be easily done, such as with mobile apps and I am hoping they are smart enough to do that.

Of course this should be happening in mobile apps. I had Buddy Finder on my TomTom years ago, but that’s not the same as navigate me to where my buddy is. That is a very cool feature and one that meets a daily need.

I haven’t heard of any of the car navigation companies having launched a Follow Me feature yet and I really want a Heads Up Display (HUD) even if it was a Navdy.  A follow that car app would seem to me to be a sitter for connected devices such as TomTom and also for traffic applications like Waze.

Following people when you don’t have nav and don’t know where you are going is a traffic hazard. So often I have seen people (including some following me) go through a light turning red, especially in urban areas where I didn’t have anywhere after the green light I went through to stop and wait for them. Then having waited, they would annoy people behind them by slowing down to let me back into the traffic so they can follow me.

Another classic that happens to me frequently is when people have different driving habits. For example the person following me to a meeting might prefer to drive much slower than the speed limit and end up dropping several cars behind me. That creates stress for both of us.

I don’t see myself buying a Jaguar to get this feature (although I love the 360 vision!) so if there are any car navigation manufacturers or app developers like Waze or others, please consider adding this feature. It will bring you sales. Follow me!