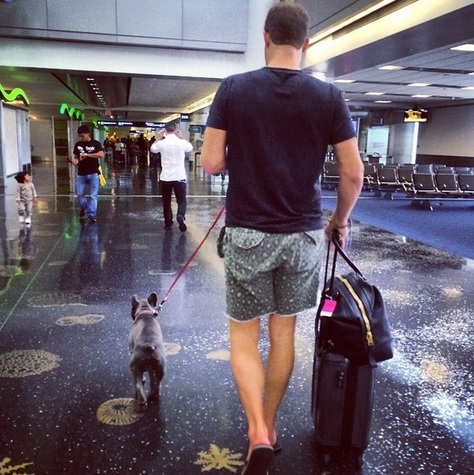 Delta has got it right in this case, pun intended.  Not only will they let you track your luggage and pay you a penalty of 2,500 Sky Miles if your luggage doesn’t turn up within 20 minutes, but they will also track your pet for you with GPS.

This is a great response to a PR debacle when people flew to New York for the prestigious Westminster Dog Show, but their pets ended up in Seattle and other places, not New York. Unlike United, they have taken a really bad situation, learned from it, committed to a better result and now provide a service which people will trust.

As to United, not only do they have a reputation for damaging guitars, they don’t appear to have learned from it. I stopped flying with them after a trip to Orlando, where I took one of my favorite guitars in a brand new case. When I picked up my guitar from the fragile luggage counter, it rattled. The bridge was broken and the piezo microphone power pack had been knocked out of its mount, which takes an enormous amount of pressure. When I asked for support from United staff at the airport they told me I obviously had a faulty case and that it was my fault. I’ve done a lot of travel since then, but not with United. They would not accept a claim and I spent my first day in Orlando getting it fixed so I could play a gig  in Longwood.

I love the idea of luggage tracking and I know SITA has been looking at this for years. My question is, if we have to have our mobile devices in flight mode when we fly, how can they have a cargo hold with a concentration of luggage and pets all transmitting their location in a fly by wire plane?

Anyway, I did fly Delta a couple of years ago and whilst the plane broke down in Denver and their agent thought Auckland was in Australia, the service was pretty good. I was too scared to carry my new guitar home as hand luggage so sent that by FedEx, but that was a hangover from my United experience, not Delta.

Word to the wise, I’ve been told a number of times that the care some ground crew treat your luggage with is inversely proportional to the number of fragile stickers on it.