Singapore Is Taking the ‘Smart City’ to a Whole New Level 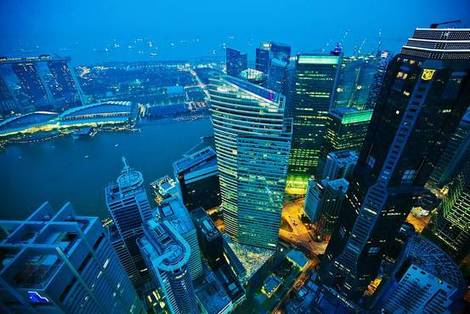 In Singapore’s “Smart City,” sensors deployed by the government will collect and coordinate data on an unprecedented level.

Sourced through Scoop.it from: www.wsj.com

This is huge. In most parts of the world there are projects monitoring data to solve unique problems such as the performance of road networks and demand/capacity management of public transport.

Smart City appears to be the stuff that Philip K Dick’s dystopian novels of a society where privacy ceases to exist and the Government knows everything including when people are smoking in a non-smoking area (like the 38 year old man who was fined around $14,000 after being filmed repeatedly throwing cigarette butts from his high rise apartment)  through to all journeys made by every single vehicle, supporting dynamic road toll pricing to reduce peak hour traffic congestion..

According to the story, Singaporeans trust their (one dominant party) Government and the statements being made about data being anonymized such that the ‘Smart City’ can deal with the efficient functioning of the city in all aspects from health to highly performing transport networks without identifying individuals.

Of course they have been leaders in this direction for some time, for example with tolling systems and enforcing T3 lanes using technology to ensure there are in fact the minimum required number of people in a vehicle to allow them to enjoy the benefits of ride-sharing in special lanes. They have even used smartphones to identify the ‘bumpiness’ of bus rides.

In theory, technology like this has a lot of value in a benevolent democracy for law abiding citizens. In many of my blogs I have said that providing my privacy is maintained, I want a retailer to know that I have a lawn and trees and offer me a leaf blower from their over-stock problem when I am in my car and within 1 km of their store.

I’m even happy (as suggested in this article) for a health department to be able to monitor toilet waste in order to identify the spread of infectious diseases (as long as it doesn’t add to my horrendous water usage bills).

You can very quickly see of course where this could go if privacy wasn’t honored. Recent battles with Apple for example in order to access data from a terrorist’s iPhone are examples where ethics and regulations start getting complex.

There is also the risk of hacking and criminal elements could find all sorts of ways of gaining information of value to them, or of disrupting networks as we see on TV and in the movies. Individuals using recreational drugs would of course have a problem with this technology if a change in government changed the rules around privacy and anonymity.

Imagine such technology in a corrupt society, with leadership wanting to maintain strict controls on their society. Singapore isn’t just looking at using this technology to improve living standards there, they want to export it and be seen as a showcase as do market leaders in this technology like IBM. I would welcome this technology in my country, but it wouldn’t be hard to come up with a list of countries where technology like his could spell disaster on an epic scale, where governments perhaps represent strong minorities rather than the will of the masses.