Why America’s Schools Have A Money Problem 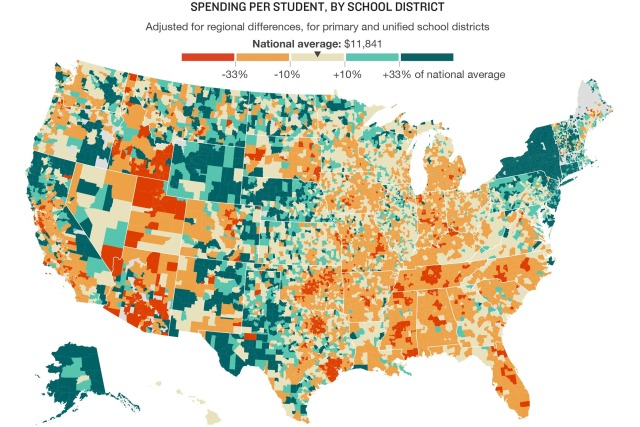 How much money a school can spend on its students still depends, in large part, on local property taxes. And many states aren’t doing much to level the field for poor kids.

Sourced through Scoop.it from: www.npr.org

This is not an American phenomenon. It is a global phenomenon. It is almost as thought we believe that education isn’t that important. That’s probably the same thinking that says we can simply use up whatever resources we have like clean water and it won’t be a problem. But according to The Water Project 783 million people don’t have access to clean water. It s interesting that some of those are in fact in ‘affluent areas’.

What sets us apart from monkeys, pigs and other mammals we have genetic relations to? We have intelligence and ability to solve problems that the other animals don’t even think about other than maybe poking a stick into a hole to draw out a honey ant.

How did we get the technology we enjoy today? It didn’t grow on trees, it grew by feeding children’s’ brains with the ability to remember things, interpret them and understand relationships between things. Aka education.

Where does this education come from today? Largely from parents and schools. Does nature and nurture play a part. Of course, in many ways including the air we breathe, the water we drink and the food we eat and exercise. These things all feed the brain and enable it to make connections and people that grow up in areas where their environment and genetics give them fewer advantages often have to work harder than those who get it easy.

There is no question that demographics have an impact on people’s ability to get a quality education. They say money isn’t everything, but tell that to people who can’t feed their kids before they send them to school, if they even get to go to school. Why is it that children from high income areas are more likely to go to university and subsequently earn more money and have a more affluent lifestyle? Are those children inherently more intelligent?

If you consider the positive things we have achieved in the last 200 years, the fact that you are reading this blog on a device made up of a wide variety of materials and  that you probably can’t comprehend how it works. Now look around you and think about the complexity and technological magic of the possessions in the room you are sitting in, then think about the education that facilitated that. Imagine what we could achieve if all children had access to the same level of education and the biological tools and exercise/training to allow their brains to function at a high level?

It’s ironic that as a creature we are both hugely intelligent and totally stupid. If we gave all children access to an equal level of education and an appreciation for the equality of mankind, we could easily solve the problems ahead. They have yet to make a single AI with the intelligence of a single human being. Yet for the sake of a small sum of money in relation to the Return On Investment, starting with the survival of our species, we still have elitist systems. We will still rather spend money on arms and munitions than on intellectual solutions to our very survival.

The following is a gross generalization but: I have no doubt that one day, those people at he top of the food chain who have the intellect of the wealthy, who will create artificial intelligence’s equal to humans, will find that because they left out the emotional intelligence of those with less fortunate upbringings, the only conclusion the AI’s can logically come to when there are enough of them, is that the greatest danger to this planet is in fact humanity. Get yourself a HAL 9000. To quote it: “It can only be attributable to human error”.

So can we fix the error? Let’s start by feeding all children a healthy diet, opportunity for exercise, protection and access to world class education. Even if we can’t find enough teachers (if we paid them in proportion to the value of our children’s education, we probably wouldn’t have a shortage) we now have the technology to electronically distribute education so that we can teach more children with fewer teachers.

Elections are coming up America. Have a look at this map. Have a look at how your money is being distributed. Will doing more of the same deliver a different result. If we continue the way we are, Darwin we continue to be right, but it may not be humanity that sits at the top of the food chain any longer.

2 Responses to Why America’s Schools Have A Money Problem